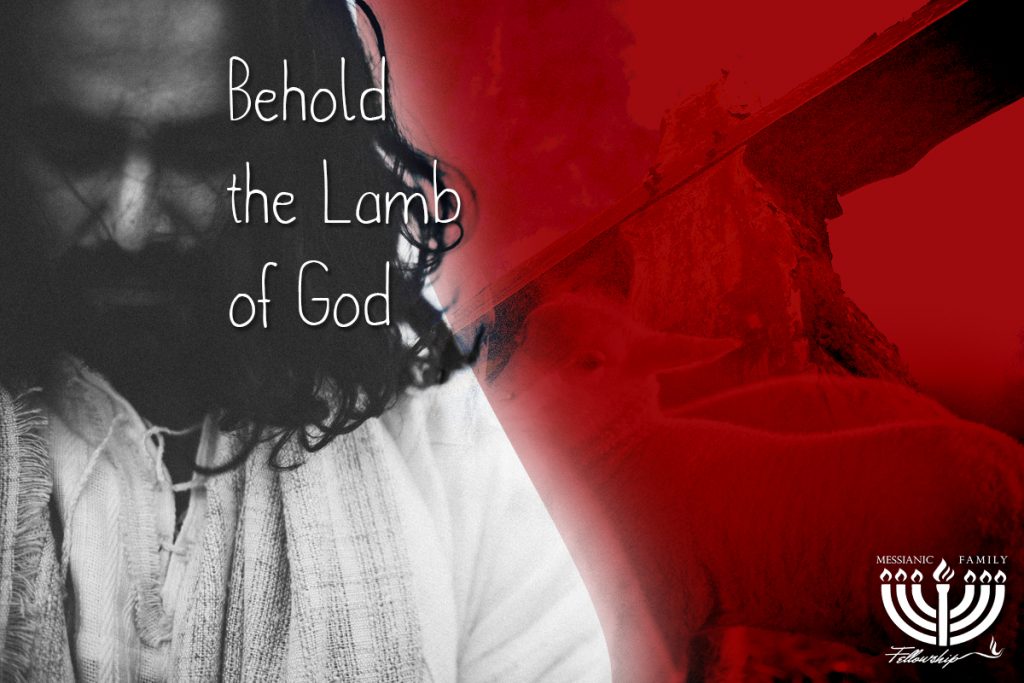 1 Corinthians 5:7b “…Messiah, our Passover Lamb, has been sacrificed for us.” For who, you might ask and what is exactly the Passover lamb? The Apostle Paul the author of this epistle uses the comparison of an ancient Hebrew feast symbol to teach a Biblical principle that God’s people are saved and set free from the slavery of sin through the sacrifice of a chosen spotless lamb. Paul clearly emphasizes that this is not an ordinary lamb like so many Hebrews had slain but this lamb was in fact, Yeshua Messiah. Ever since the days of Abraham and the offering of Isaac, his only begotten son, there was an expectation of a perfect ram/lamb sacrifice to come in the form of another son…the son of God:

Genesis 22:2, 6-7 KJV 2 “And he said, Take now thy son, thine only [son] Isaac, whom thou lovest, and get thee into the land of Moriah; and offer him there for a burnt offering upon one of the mountains which I will tell thee of. … 6 And Abraham took the wood of the burnt offering, and laid [it] upon Isaac his son; and he took the fire in his hand, and a knife; and they went both of them together. 7 And Isaac spake unto Abraham his father, and said, My father: and he said, Here [am] I, my son. And he said, Behold the fire and the wood: but where [is] the lamb for a burnt offering?”

It is important to note here that Solomon, the son of David and King of Israel, built the Temple of God on the same mountain region as where Abraham and Isaac were when God provided the sacrifice ( 1 Chronicles 3:1). And just as Abraham lifted the knife of sacrifice toward his bound son, the voice of the Lord tells him three times to stop and that God Himself will provide a sacrifice, as a ram is caught in the thicket by Abraham. Ever since these days there has been an expectation on Israel for God’s lamb sacrifice to come and take away the sins of the world. It is the love of God that would give of His most precious offering, His only son, Jesus. In fact, the Hebrew word for love is ahav אהב and the very first time this word is mentioned in the entire Bible is found in this passage dealing with Abraham giving up his son whom he “loved.” There is no greater love than this according to the Biblical definition of love. Indeed it was John the Baptist that proclaimed on the banks of the Jordan river that Jesus, the embodiment of His love, was that lamb chosen by God to take away the sins of the world (John 1:29).

So where did the term “Passover” come from? The mention of Passover is in the story of the people of Israel bound in slavery in the land of Egypt. The sons of Jacob (Israel) came down into Egypt and settled in the land of Goshen. Scripture tells us that a new Pharaoh rose up that did not know Joseph or the God of Joseph (Exod. 1:8). This Pharaoh saw the blessing of God upon Israel because they prospered at all they did. Their cattle and their crops were greater and even their sons and daughters multiplied greatly (Exod. 1:12). Pharaoh became fearful that the children of Israel would try to take over Egypt so he devised a plan of putting them under slavery to keep them from multiplying any further. For 400 years the children of Israel served Mitzrayim (Egypt) and it became known to the Pharaoh that a deliverer was coming to set the people of Israel free who would be born among the Hebrews. Moshe (Moses) was that deliverer  and through 10 judgments or plagues the hand of God through the prophet Moses slew the “Goliath” nation of Egypt and cut off the head or posterity of the King of the known world. It was at the 10th judgment that the children of Israel would be set free. It was the judgment of death to the first born and the only judgment that offered instruction for those that would obey to escape this death penalty. Through the blood of a spotless yearling lamb placed on the door posts and lintel anyone (Hebrew or non-Hebrew) would be saved from death.  The blood was a sign so that the death angel would “pass over” the homes that had this sign and only enter the homes that did not. The Passover meal is a remembrance of this day and includes elements that are to remind and teach future generations about the deliverance of the children of Israel with a “mighty hand and an outstretched arm.” It is during this strange feast in the evening instructed by God Himself that we see a remarkable picture of salvation and deliverance.

Exodus 12:21-23 ESV 21 “Then Moses called all the elders of Israel and said to them, “Go and select lambs for yourselves according to your clans, and kill the Passover lamb. 22 Take a bunch of hyssop and dip it in the blood that is in the basin, and touch the lintel and the two doorposts with the blood that is in the basin. None of you shall go out of the door of his house until the morning. 23 For the LORD will pass through to strike the Egyptians, and when he sees the blood on the lintel and on the two doorposts, the LORD will pass over the door and will not allow the destroyer to enter your houses to strike you.”

If you have read this story before or maybe have seen the popular movie, “The Ten Commandments,” with Charleton Heston you sort of get the picture that the Lord entered Egypt and killed the first born of anyone that didn’t have the blood applied to their doorposts. However, at closer investigation you will see that it is the “Destroyer” that kills the first born of Egypt and the Lord is the one that sees the blood and places Himself over the doorway and keeps the Destroyer from entering into those homes. Exodus 12:23b… “the LORD will pass over the door and will not allow the destroyer to enter your houses to strike you.” It is worth noting here that in the Ancient Near East during this time there were customs that sacrifices would be killed at the threshold of the door of houses and that in some cases this would protect the home from invaders and bad spirits1. Later in history the Jewish people added this theme to a commandment of the Torah to write the commandments upon the doorposts of their homes. This was called a mezuzah and modern day mezuzahs on the doorways of Jewish homes bear the Hebrew letter shin, representing “shaddai” or the protector of the door.

Scholars believe that after the prophet of Malachi finished his written scroll there was approximately 400 years of “silence” when no prophet spoke to Israel and the land was void of a voice from heaven. During this 400 years Israel was taken over by the Babylonians, the Medio-Persians, Greece, Egypt, Syria, and finally Rome. Instead of slavery to one nation they were slaughtered and pillaged by many nations and during the reign of King Herod (not from the lineage of David) there arose a rumor of a King of the Jews and deliverer to be born at this time. Like in the days of Moses, the ruler of the Jews decreed for the slaughtering of innocent male children in a futile attempt to debunk the Sovereign’s plan (Matthew 2:16). In fact the similarities don’t stop there. Joseph and Mary were told by the Angel of the Lord to flee to Egypt and to return when it was safe. Mary’s name would have been the Hebrew name Miriam and in the Old Testament Miriam was the sister of Moses that hid him in Egypt. Was this coincidence or God’s prophetic plan? It was in a town called Bethlehem, that the deliverer was born. This was the town that Rachael, Jacob’s wife died (Gen. 35:19), and the place that she would be “weeping for her children” as they were slaughtered by the evil King Herod (Matthew 2:18).  In this desperate time a deliverer named Yeshua not Moses was born and the one promised to be a prophet like unto Moses (Deut. 18:15). Born to be rejected, beaten and torn and just like Isaac who carried the wood of sacrifice upon his back so He would be destined to carry the heavy wood of the cross upon his back as he climbed the same hill as God’s spotless lamb caught in the thickets of a crown of thorns upon his head.  It would be the blood of Yeshua that would set the captives free not from the grips of Egyptian slavery but the pangs of slavery of sin that leads to death. Just as the blood of the lamb caused the Lord to protect the first born from the Destroyer, so the blood of the Lamb of God brings freedom and protection from the enemy of our souls. This is why the writer of Hebrews in chapter 11 states that “Through faith he kept the passover, and the sprinkling of blood, lest he that destroyed the firstborn should touch them.” He adds a very important clue in this statement that it was by “faith” that the Passover was kept. There are many believers that think today that the observance of Passover is an empty Jewish tradition but in all reality this feast of the Lord is a symbol of the passing over from death into life and entering into a covenant protection and blessing in the Lord. When we drink of the cup and eat of the unleavened bread, called matzah, we discern the body and blood of Jesus. As believers in Yeshua Messiah as the Passover lamb, this feast is not about leaving Egypt but it is about celebrating the feast of freedom from sin and death.

1Corinthians 11:23-25 KJV “For I have received of the Lord that which also I delivered unto you, That the Lord Yeshua the [same] night in which he was betrayed took bread: 24 And when he had given thanks, he brake [it], and said, Take, eat: this is my body, which is broken for you: this do in remembrance of me. 25 After the same manner also [he took] the cup, when he had supped, saying, This cup is the new testament in my blood: this do ye, as oft as ye drink [it], in remembrance of me.”