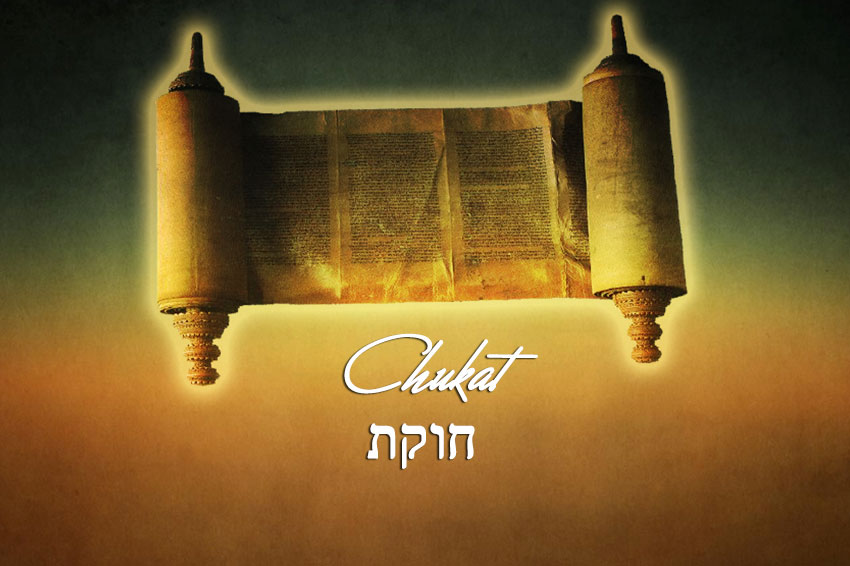 14 “This is the law: when a person dies in a tent, everyone who enters the tent and everything in the tent will be unclean for seven days. 15 Every open container without a cover closely attached is unclean. 16 Also whoever is in an open field and touches a corpse, whether of someone killed by a weapon or of someone who died naturally, or the bone of a person, or a grave, will be unclean for seven days.

17 “For the unclean person they are to take some of the ashes of the animal burned up as a purification from sin and add them to fresh water in a container. (LY: ii) 18 A clean person is to take a bunch of hyssop leaves, dip it in the water and sprinkle it on the tent, on all the containers, on the people who were there, and on the person who touched the bone or the person killed or the one who died naturally or the grave. 19 The clean person will sprinkle the unclean person on the third and seventh days. On the seventh day he will purify him; then he will wash his clothes and himself in water; and he will be clean at evening. 20 The person who remains unclean and does not purify himself will be cut off from the community because he has defiled the sanctuary of Adonai. The water for purification has not been sprinkled on him; he is unclean. 21 This is to be a permanent regulation for them. The person who sprinkles the water for purification is to wash his clothes. Whoever touches the water for purification will be unclean until evening. 22 Anything the unclean person touches will be unclean, and anyone who touches him will be unclean until evening.”

20 The people of Isra’el, the whole community, entered the Tzin Desert in the first month, and they stayed in Kadesh. There Miryam died, and there she was buried.

2 Because the community had no water, they assembled themselves against Moshe and Aharon. 3 The people quarreled with Moshe and said, “We wish we had died when our brothers died before Adonai. 4 Why did you bring Adonai’s community into this desert? To die there, we and our livestock? 5 Why did you make us leave Egypt? To bring us to this terrible place without seed, figs, grapevines, pomegranates or even water to drink?” 6 Moshe and Aharon left the assembly, went to the entrance of the tent of meeting and fell on their faces; and the glory of Adonai appeared to them.

(RY: ii, LY: iii) 7 Adonai said to Moshe, 8 “Take the staff, assemble the community, you and Aharon your brother; and before their eyes, tell the rock to produce its water. You will bring them water out of the rock and thus enable the community and their livestock to drink.” 9 Moshe took the staff from the presence of Adonai, as he had ordered him. 10 But after Moshe and Aharon had assembled the community in front of the rock, he said to them, “Listen here, you rebels! Are we supposed to bring you water from this rock?” 11 Then Moshe raised his hand and hit the rock twice with his staff. Water flowed out in abundance, and the community and their livestock drank.

12 But Adonai said to Moshe and Aharon, “Because you did not trust in me, so as to cause me to be regarded as holy by the people of Isra’el, you will not bring this community into the land I have given them.” 13 This is M’rivah Spring [Disputation Spring], where the people of Isra’el disputed with Adonai, and he was caused to be regarded as holy by them.

(LY: iv) 14 Moshe sent messengers from Kadesh to the king of Edom: “This is what your brother Isra’el says: you know all the troubles we have gone through — 15 that our ancestors went down into Egypt, we lived in Egypt a long time, and the Egyptians treated us and our ancestors badly. 16 But when we cried out to Adonai, he heard us, sent an angel and brought us out of Egypt. Now here we are in Kadesh, a city at the edge of your territory. 17 Please let us pass through your land. We will not go through fields or vineyards, and we won’t drink any water from the wells. We will go along the King’s Highway, not turning aside either to the right or to the left until we have left your territory.”

18 But Edom answered, “You are not to pass through my land; if you do, I will come out against you with the sword.” 19 The people of Isra’el replied, “We will keep to the highway; if we do drink the water, either we or our livestock, we will pay for it. Just let us pass through on foot — it’s nothing.” 20 But he said, “You are not to pass through”; and Edom came out against them with many people and much force. 21 Thus Edom refused to allow Isra’el passage through its territory, so Isra’el turned away.

(RY: iii, LY: v) 22 They traveled on from Kadesh; and the people of Isra’el, the whole community, arrived at Mount Hor. 23 At Mount Hor, by the border of the land of Edom, Adonai said to Moshe and Aharon, 24 “Aharon is about to be gathered to his people, because he is not to enter the land I have given to the people of Isra’el, inasmuch as you rebelled against what I said at the M’rivah Spring. 25 Take Aharon and El‘azar his son, bring them up to Mount Hor, 26 remove the garments from Aharon and put them on El‘azar his son. Aharon will be gathered to his people — he will die there.”

27 Moshe did as Adonai had ordered. They went up onto Mount Hor before the eyes of the whole community. 28 Moshe removed the garments from Aharon, and put them on El‘azar his son, and Aharon died there on the top of the mountain. Then Moshe and El‘azar came down the mountain. 29 When the entire community saw that Aharon was dead, they mourned Aharon thirty days, the whole house of Isra’el.

21 Then the king of ‘Arad, a Kena‘ani who lived in the Negev, heard that Isra’el was approaching by way of Atarim, so he attacked Isra’el and took some of them captive. 2 Isra’el made a vow to Adonai, “If you will hand this people over to me, I will completely destroy their cities.” 3 Adonai listened to what Isra’el said and handed over the Kena‘anim, so they completely destroyed them and their cities and named the place Hormah [complete destruction].

4 Then they traveled from Mount Hor on the road toward the Sea of Suf in order to go around the land of Edom; but the people’s tempers grew short because of the detour. 5 The people spoke against God and against Moshe: “Why did you bring us up out of Egypt? To die in the desert? There’s no real food, there’s no water, and we’re sick of this miserable stuff we’re eating!”

(LY: vi) 6 In response, Adonai sent poisonous snakes among the people; they bit the people, and many of Isra’el’s people died. 7 The people came to Moshe and said, “We sinned by speaking against Adonai and against you. Pray to Adonai that he rid us of these snakes.” Moshe prayed for the people, 8 and Adonai answered Moshe: “Make a poisonous snake and put it on a pole. When anyone who has been bitten sees it, he will live.” 9 Moshe made a bronze snake and put it on the pole; if a snake had bitten someone, then, when he looked toward the bronze snake, he stayed alive.

16 From there they went on to Be’er [well]; that is the well about which Adonai said to Moshe, “Assemble the people, and I will give them water.” 17 Then Isra’el sang this song:

“Spring up, oh well!
Sing to the well
18 sunk by the princes,
dug by the people’s leaders
with the scepter,
with their staffs!”

From the desert they went to Mattanah, 19 from Mattanah to Nachali’el, from Nachali’el to Bamot, 20 and from Bamot to the valley by the plain of Mo’av at the start of the Pisgah range, where it overlooks the desert.

(RY: iv, LY: vii) 21 Isra’el sent messengers to Sichon, king of the Emori, with this message: 22 “Let me pass through your land. We won’t turn aside into fields or vineyards, and we won’t drink any water from the wells. We will go along the King’s Highway until we have left your territory.” 23 But Sichon would not allow Isra’el to pass through his territory. Instead, Sichon mustered all his people and went out into the desert to fight Isra’el. On reaching Yachatz, he fought Isra’el. 24 Isra’el defeated him by force of arms and took control of his land from the Arnon to the Yabok River, but only as far as the people of ‘Amon, because the territory of the people of ‘Amon was well defended. 25 Isra’el took all these cities — Isra’el lived in all the cities of the Emori, in Heshbon and all its surrounding towns. 26 Heshbon was the city of Sichon, the king of the Emori, who had fought against the former king of Mo’av and conquered all his land up to the Arnon. 27 This is why the storytellers say,

“Come to Heshbon! Let it be rebuilt!
Let Sichon’s city be restored!

28 “For fire burst out of Heshbon,
a flame from the city of Sichon.
It consumed ‘Ar of Mo’av,
the lords of Arnon’s high places.

29 “Woe to you, Mo’av!
You are destroyed, people of K’mosh!
He let his sons be fugitives and his daughters captives
of Sichon, king of the Emori.

30 “We shot them down; Heshbon is destroyed,
all the way to Divon.
We even laid waste to Nofach,
which extends as far as Meidva.”

31 Thus Isra’el lived in the land of the Emori.

32 Moshe sent men to reconnoiter Ya‘zer; they captured its towns and drove out the Emori who were there.

33 Then they turned and went up along the road to Bashan; and ‘Og, the king of Bashan, marched out against them, he with all his people, to fight at Edre‘i. (LY: Maftir) 34 Adonai said to Moshe, “Don’t be afraid of him, for I have handed him over to you with all his people and his land. You will treat him just as you did Sichon, king of the Emori, who lived at Heshbon.” 35 So they struck him down, with his sons and all his people, until there was no one left alive; and then they took control of his land.

22 Then the people of Isra’el traveled on and camped in the plains of Mo’av beyond the Yarden River, opposite Yericho.