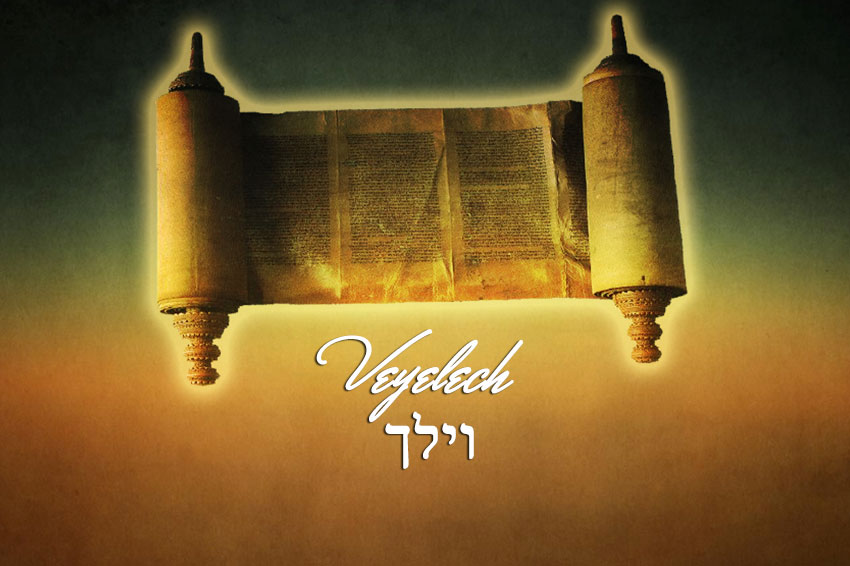 31 Moshe went and spoke the following words to all Isra’el: 2 “I am 120 years old today. I can’t get around any longer; moreover, Adonai has said to me, ‘You will not cross this Yarden.’ 3 Adonai your God — he will cross over ahead of you. He will destroy these nations ahead of you, and you will dispossess them. Y’hoshua — he will cross over ahead of you, as Adonai has said. (LY: ii) 4 Adonai will do to them what he did to Sichon and ‘Og, the kings of the Emori, and to their land — he destroyed them. 5 Adonai will defeat them ahead of you, and you are to do to them just as I have ordered you to do. 6 Be strong, be bold, don’t be afraid or frightened of them, for Adonai your God is going with you. He will neither fail you nor abandon you.”

(RY: v, LY: iii) 7 Next Moshe summoned Y’hoshua and, in the sight of all Isra’el, said to him, “Be strong, be bold, for you are going with this people into the land Adonai swore to their ancestors he would give them. You will be the one causing them to inherit it. 8 But Adonai — it is he who will go ahead of you. He will be with you. He will neither fail you nor abandon you, so don’t be afraid or downhearted.”

9 Then Moshe wrote down this Torah and gave it to the cohanim, the descendants of Levi who carried the ark with the covenant of Adonai, and to all the leaders of Isra’el. (LY: iv) 10 Moshe gave them these orders: “At the end of every seven years, during the festival of Sukkot in the year of sh’mittah, 11 when all Isra’el have come to appear in the presence of Adonai at the place he will choose, you are to read this Torah before all Isra’el, so that they can hear it. 12 Assemble the people — the men, the women, the little ones and the foreigners you have in your towns — so that they can hear, learn, fear Adonai your God and take care to obey all the words of this Torah; 13 and so that their children, who have not known, can hear and learn to fear Adonai your God, for as long as you live in the land you are crossing the Yarden to possess.”

(RY: vi, LY: v) 14 Adonai said to Moshe, “The time is coming for you to die. Summon Y’hoshua, and present yourselves in the tent of meeting, so that I can commission him.” Moshe and Y’hoshua went and presented themselves in the tent of meeting. 15 Adonai appeared in the tent in a column of cloud; the column of cloud stood above the entrance to the tent. 16 Adonai said to Moshe, “You are about to sleep with your ancestors. But this people will get up and offer themselves as prostitutes to the foreign gods of the land where they are going. When they are with those gods, they will abandon me and break my covenant which I have made with them. 17 Then my anger will flare up, and I will abandon them and hide my face from them. They will be devoured, and many calamities and troubles will come upon them. Then they will ask, ‘Haven’t these calamities come upon us because our God isn’t here with us?’ 18 But I will be hiding my face from them because of all the evil they will have done in turning to other gods.

19 “Therefore, write this song for yourselves, and teach it to the people of Isra’el. Have them learn it by heart, so that this song can be a witness for me against the people of Isra’el. (RY: vii, LY: vi) 20 For when I have brought them into the land I swore to their ancestors, flowing with milk and honey; and they have eaten their fill, grown fat and turned to other gods, serving them and despising me, and broken my covenant; 21 then, after many calamities and troubles have come upon them, this song will testify before them as a witness, because their descendants will still be reciting it and will not have forgotten it. For I know how they think even now, even before I have brought them into the land about which I swore.” 22 So Moshe wrote this song that same day and taught it to the people of Isra’el.

23 Adonai also commissioned Y’hoshua the son of Nun with these words: “Be strong and full of courage; for you are to bring the people of Isra’el into the land about which I swore to them; and I will be with you.”

24 Moshe kept writing the words of this Torah in a book until he was done. When he had finished, (LY: vii) 25 Moshe gave these orders to the L’vi’im who carried the ark with the covenant of Adonai: 26 “Take this book of the Torah and put it next to the ark with the covenant of Adonai your God, so that it can be there to witness against you. 27 For I know how rebellious and stiffnecked you are! Here, even while I am still alive with you today, you have rebelled against Adonai; so how much more will you do so after my death? (Maftir) 28 Assemble for me all the leaders of your tribes and your officials, so that I can say these things in their hearing, calling heaven and earth to witness against them — 29 because I know that after my death you will become very corrupt and turn aside from the way that I have ordered you, and that disaster will come upon you in the acharit-hayamim, because you will do what Adonai sees as evil and provoke him by your deeds.”

30 Then Moshe spoke in the hearing of the whole assembly of Isra’el the words of this song, from beginning to end: